About Us
History
Resources
Links

The Joyriders was founded in 1979 by Anita Morrison and Daphne Davey, since when it has served over 100 riders and hundreds of volunteers. In 1980, The Joyriders was a founding member of the Canadian Therapeutic Riding Association (CanTRA).

Our introductory program was held in the summer of 1979 at Camp Gencheff in Kinlock, which we continued for a number of years. That year, we also introduced a spring and fall riding program based at Woodmere Stables in Marshfield, then Birch Lane Farm in Milton. In 1995 we moved to the Winsloe Equestrian Centre in Winsloe South (owned by Kathryn and John Barrett), which was renamed under new ownership as Island Wide Equestrian. In 2016 we moved to the Barretts' new home at River Trails Ranch in Hunter River.

In 2019 we celebrated our 40th anniversary at River Trails Ranch with an Open House attended by 100 visitors, including special guests Lieutenant Governor Antoinette Perry and Premier Dennis King.

We currently operate spring and fall riding programs with weekly lessons, a summer introductory horsemanship program, and a special program with Bobbi, the Miniature Horse. 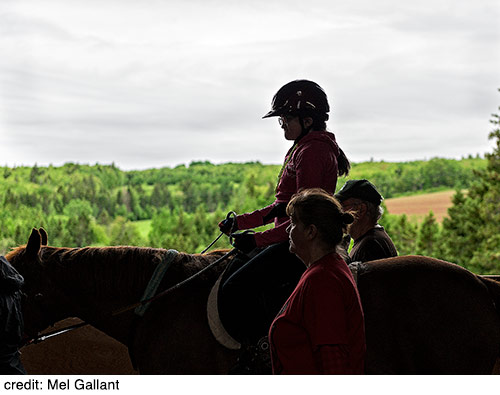